Ann Arbor is a very diverse place largely thanks to the University of Michigan. People come from all over the world and leave some of their culture here as a result. A large part of that diversity can be found in food. From food trucks to fine dining, there’s something for everyone that comes to Ann Arbor. This city is very well-known for its love of small businesses, so there are plenty of restaurants here that you cannot find anywhere else. 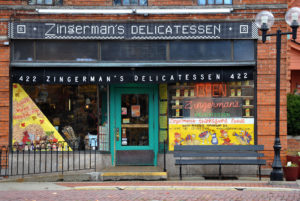 When locals introduce you to Ann Arbor restaurants, they will likely point you to Zingerman’s Deli, where you can order some amazing sandwiches on house-made bread and maybe some coffee on the side. Head east to Kerrytown, and you’ll find a few more local favorites, including Miss Kim and The Lunch Room. Part of the Zingerman’s Community of Businesses, Miss Kim brings in traditional Korean food with a desire to showcase Michigan’s produce. The Lunch Room stands out as restaurant with a fully vegan menu. They partner with a nonprofit organization called the Youth Justice Fund and donate to other local nonprofits as well.

Move a little south to Liberty Street, and you’re hit with plenty more food options. Tomukun started as Ann Arbor’s first noodle bar, later adding Korean BBQ right next door. The noodle bar’s menu includes Asian comfort food from various countries including Vietnam, Japan, Thailand, and China. The Korean BBQ side takes chefs traditionally-trained in Koreatown-Los Angeles and ensures that everything is house-made. With table-top grills and Korean soul food,Tomukun is a must when visiting Ann Arbor. After celebrating 30 years at their original location on the west side of town, Knight’s Steakhouse opened their downtown location, not too far from Tomukun. Knight’s would be considered what we call a classic American restaurant with a focus on steak, prime rib, chicken, burgers, and seafood. Right across the street, you can stop by TK Wu for some authentic Chinese food. This is our Student Affairs Coordinator’s favorite spot in town! When you head down toward Main Street, you’ll pass by a place called Jerusalem Garden. Founded in 1987, this restaurant has been a local favorite for its reasonable prices and large portions of Mediterranean foods.

Keep going west on Liberty Street, and you’ll hit Main Street, which holds another whole plethora of restaurants. Pacific Rim by Kana is a great option for Asian inspired dishes. It is known for its ability to merge Asian ingredients and flavors with Western cooking techniques. It is a food experience you will not get anywhere else. Go a block north and you’ll see Frita Batidos. Go inside and enjoy some great Cuban-inspired street food like the frita (a Cuban burger), crisped plantains, batidos (tropical milkshakes), and churros.

Stay tuned for further guides to getting around in Ann Arbor!